Inverted stability applies when a yacht remains upside down. It is a rare, but not unknown event and one situation where some understanding of yacht design and stability can become of crucial importance at sea. 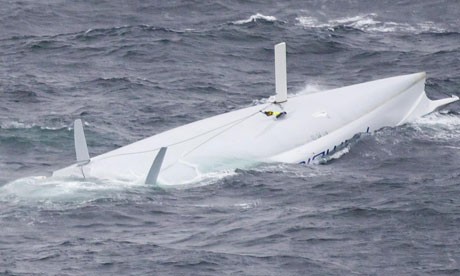 Loss of the ballast is not particularly reversible…

The first situation is difficult to overcome to say the least; the second is the one of interest to us here.

Safety directives today tend to require that offshore yachts achieve positive stability up to at least 120°. At the limit, this means that – in flat water – the yacht rights itself up from angles all the way to 120°, and rolls over completely to reach a stable inverted position from angles beyond 120°.

Debates whether this limit if sufficient or not exist. They are not very interesting due to lack of supporting data. Let’s say that:

This is why it is so difficult to challenge the consensus existing around vanishing stability around 120° heel. For all reasonable intents and purposes, it seems to be appropriate, even though one could wish for a little more for small vessels, below 10 metres.

Regardless, once inverted, most yachts are quite stable and sometimes more stable than upright as the deck and roof plane can be flatter and broader than the upright hull. As soon as the overturned hull rolls, buoyancy rapidly shifts towards the immersed deck edge to oppose re-righting.
When sea conditions were sufficient to cause capsize due to heavy weather, it shouldn’t arguably take very long for another big one to hit the hull and appendages and “trip” the boat back up. Experience has shown that, in such conditions, yachts in fact seldom stabilise upside-down at all, but capsize doesn’t always happen that way:

The following account – quite recent then – was reported to me when I called in Ushuaia, Argentina, in 1996. A yacht crossing Drake Passage between Cape Horn and Antarctica was making normal progress in winds of 25 knots and the long, high sea that is so often found in this area. Conditions were good. Out of the blue, a single wave broke heavily on the beam and rolled the yacht over completely, leaving it inverted with the crew trapped inside.
The water level started rising from the deck head up, and kept increasing steadily. Better ways to end than drowning trapped in a sinking boat were starting to be seriously considered on board when the yacht finally rolled to one side and came back, with a fair volume of water inside, but upright. The boat was reportedly upside-down for some 20 minutes. The crew bailed it out and brought it back.

In the same ocean area in 1996, a 38′ Dutch steel cutter was a day behind Yarra when it also got hit beam on by a large sea in moderate winds with the crew down-below and rolled to what was later assessed as about 135° from the damage sustained on board. The galley stove broke its gimbals and hit above the chart table on the other side. However, it wasn’t quite enough and the boat came back upright immediately. The crew brought it back slowly, handicapped by sail damage followed by a transmission failure.

Very few yachts are watertight in a fully inverted position. Typically, at least the companionway will leak, in most cases ventilators and dorade boxes will also contribute to water ingress. The paradox is that flooding is precisely what will cause them to come back, rather than sink as often suggested.

As water starts to rise from the deck up in the inverted hull and sloshes around as the boat rolls, it readily shifts into the hull-deck joint area, filling the “corner” and effectively removing the buoyancy in the part of the hull that was initially contributing to the righting moment. The mass of water in motion also further reduces stability through what is termed free-surface effect.

Provided the keel is intact, it is only a question of time before the boat comes back. Shift heavy gear to the lee side if possible, and if you can work out which one is the lee side. Let it fill and get organised to bail it out later. It will come back, but it usually takes enough water to fill the roof space and some more to slosh into the corner of the hull. Upright yachts abandoned at sea have sometimes been found flooded up close to the deck, but still afloat. It takes a lot less water than this to bring an inverted yacht back. 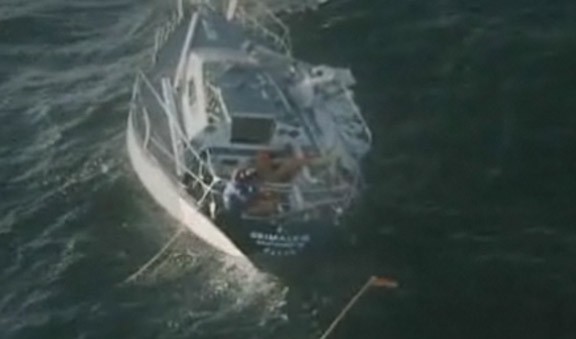 Fastnet 1979: Grimalkin, dismasted and rolled repeatedly. In spite of what was termed a poor stability curve and insufficient AVS, it didn’t end up remaining inverted.

A fully watertight vessel, like what can be obtained using a deck hatch as main entranceway, would not benefit from flooding and could remain inverted almost indefinitely without other ways of overcoming inverted stability.

2 Responses to “Inverted Stability: Once Upside Down”