Significant damage sustained by sea-going vessels mostly originates from wave action. In this context, discussing the characteristics and behaviour of waves is valuable. Wave theory is quite extensive and complex, but only a very small amount of knowledge about waves is essential to small-craft sailors to anticipate the risks that can arise from waves.

Waves are generated by the wind. There is a relation between fetch, wind speed and the maximum wave height that will result over time. Even with unlimited fetch and duration, the speed, length and height of the sea remain limited by wind speed. Sailors however have to contend with whatever gets dished out, and wave generation has little interest to us in the end.

There are two relations of critical interest to sailors in wave theory:

The velocity of the waves in deep water varies with the square root of the distance between the crests, a quantity also known as the wave length. This means it increases very quickly initially as the sea gets longer, and then more gradually. Regardless of its height, a long sea travels faster and velocities in excess of 30 knots are not uncommon. If it breaks, the water in the crest travels at a speed at least equal to the one of the wave, and higher if the crest comes crashing forward: this can equate to a very large sledgehammer. This is very important to grasp, because the kinetic energy in a breaking crest increases with the square of the water velocity, which makes it proportional to the wave length again. A break in a long, fast sea can pack a phenomenal punch. This situation is typical of the high latitudes offshore: the sea is high, but in the same time so long that it creates false sense of security. People tend to think that “it is just a harmless swell” and get caught, sometimes with catastrophic results. In the mid 1990s, a yacht was capsized in just 25 knots of wind by a single breaking sea south of Cape Horn and remained upside-down for some time while filling up, because there wasn’t another breaker to knock it back up.

In order to propagate undisturbed, a deep water wave requires a depth at least equal to half of the distance separating the crests

If the sea bed rises, long waves can start “feeling the bottom”, slow down, become steeper and develop a tendency to break. This is very important. At the edge of the continental shelf, depths commonly change abruptly from some 1000-1500 metres or more to less than 200 metres. A gradually shoaling bottom is also causes swells to “wrap” around islands and headlands with waves eventually arriving perpendicularly on the coast regardless of their dominant direction offshore. 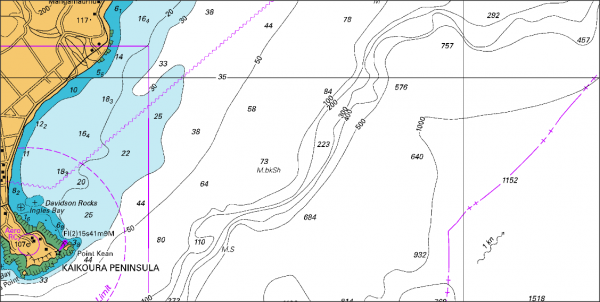 Long wavelengths in the sea react to this change and one can often feel it while sailing across the transition zone: the slow, sedate rhythm of the sea offshore changes, it feels restless. The sea can break very unexpectedly in this area.

The wind was fresh and the sea quite rough as I sailed off the coastal shelf and into ocean-deep water after leaving Iceland, but the weather couldn’t be qualified as bad. I didn’t think conditions warranted changing course and kept going with a beam sea. Three times the same night, seas broke on the beam and rolled the sloop with the mast close to horizontal. The first two times, I thought we would soon be on the other side of the bad patch and kept going. The third time was enough and I changed course. Even though no consequences resulted, sailing over the edge with a beam sea is not something I would do today: far too dangerous.

I have found nervous, unstable seas over the edges of continental shelves all over the world. Off South Africa, full-size ships avoid remaining in that area due to the number of wave-induced accidents that have occurred in the past.

A sea is nearly always formed of a system of waves of different lengths and amplitudes. There usually are one or two dominant components, such as a ground swell and wind-generated waves. When depth decreases, the long components in the sea will break first, even if they were hardly noticeable until then. This is how small vessels fishing on a shoal in calm weather can get capsized unexpectedly.

One extremely hazardous scenario arises from seeking shelter by anchoring off unprotected oceanic coastlines. As the long as the weather blows from the shore, it will keep ocean swells at bay, but those can reappear very rapidly as soon as the wind drops and break due to the shelving bottom.

The yacht Solace was lost on the south coast of Easter Island in 2020 after being rolled at anchor in 12 metres of water by a huge wave in the middle of the night. Due to its geographic position, the south side of the island in particular is very exposed to large Southern Ocean swells. The yacht had moved around the island from the Hanga Roa anchorage to Hanga Vinapu to shelter from strong winds; when the wind eased, it should really have left immediately. It didn’t and both vessel and crew were lost. Anchoring off unprotected islands with the open ocean behind is a risky proposition that requires extreme vigilance and seeking shallow water further magnifies the danger.

Because the sea is formed from different superimposed wavelengths, uneven heights are reached near-randomly. The phenomenon can create unstable waves unexpectedly even in deep water, especially when the dominant components are already steep. The worst scenario develops when different wave systems arrive from different directions; at the intersections of the crests, pyramidal waves that can reach considerable heights are created. This is also typical of high-latitude mid-ocean conditions, where huge frontal weather systems formed of northwest and southwest winds often sweep through in rapid succession.

This means that by simply timing the sea offshore, one can calculate its length and velocity. A sea with a period of 10 seconds will have a length of 156 metres and a velocity of 30 knots. If the crest detaches and plunges forward into the trough, this mass of water can momentarily move faster than the wave itself. At such speed, it doesn’t take a very large crest at all to deliver a damaging blow to a vessel, or pick it up and dump it in the wave trough with a tremendous impact.

Regardless of wind conditions, one should be particularly cautious in the following situations: