The most relevant way of expressing the relation between heel and stability for a given vessel is plotting the GZ-curve or the righting moment curve.

Ships and load-carrying vessels start from KN-curves, because they allow taking into account large variations in trim and loading, but at the expense of added complexity we don’t need for pleasure crafts and the outcome after a lot of work is still a GZ-curve.

GZ is a quantity that was introduced earlier and since the righting moment is simply GZ multiplied by the weight of the vessel, both curves look exactly the same, the only difference being the unit used for expressing them. 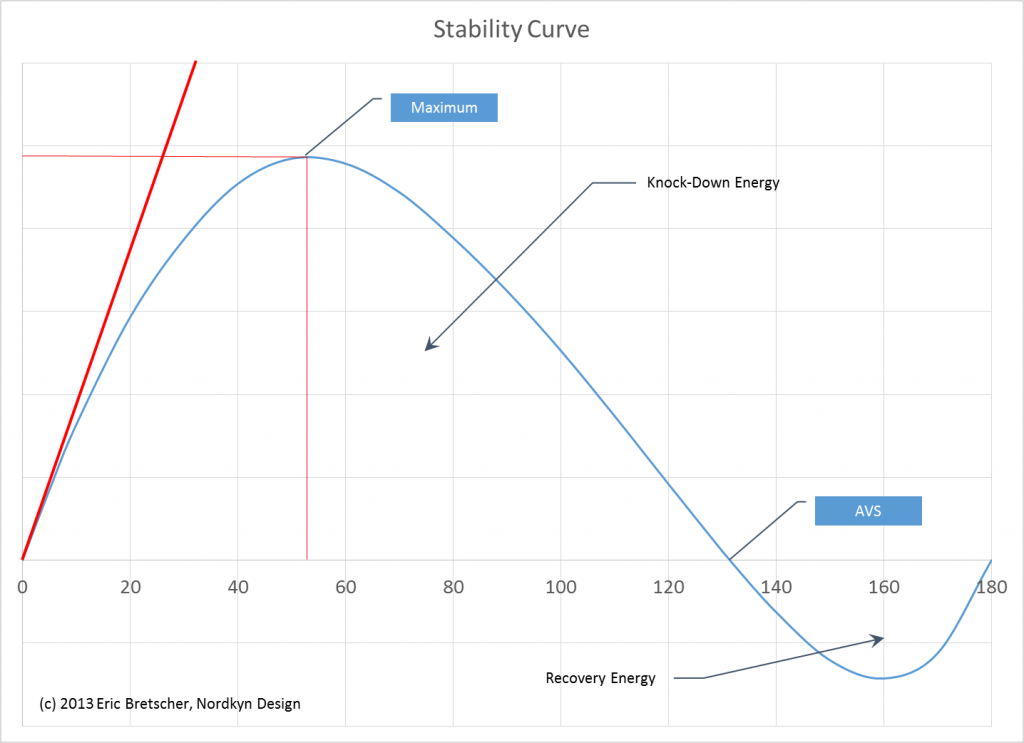 Stability curve for a modern yacht

There are number of elements of immediate interest in such a stability curve:

Desirable properties in the stability curve of small ocean-going vessels are:

The Effect of VCG Increase on the Stability Curve

The consequence adding weight above the original centre of gravity of a vessel on its stability curve depends on how stability was achieved in the first place.

A primarily form-stable vessel largely retains its initial stability when its centre of gravity is raised, but maximum stability is reached at lower angles, it will capsize earlier and become more stable inverted.

Shallow, beamier hulls nearly always feel stiff and safe under normal conditions and variations in the height of the centre of gravity are not readily noticeable. The issue is that unless their centre of gravity is kept adequately low, their stability can peak very quickly and then collapse towards the point of capsize. There is little in the way of a gradual warning. 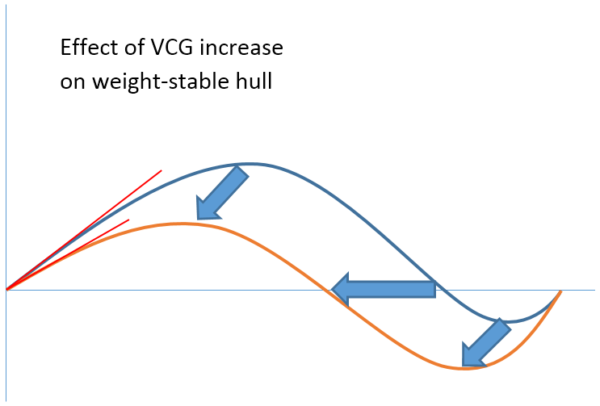 A vessel primarily relying on ballast for stability becomes more tender when its centre of gravity is raised. It will capsize earlier and become more stable upside-down.

Deep hulls don’t have a great deal of initial stability, but their limit in terms of acceptable vertical centre of gravity only reduces gradually with heel. It is a mixed blessing. Since they are not very stiff in the first place and the change is very gradual, it is difficult to assess the safe zone. By the time they start feeling tender, rolling further and coming back more slowly, they may already be a long way into the danger zone. A tide rip, a steep wave on the beam and they can capsize with little warning.

The stability curve relates to the hydrostatic properties of the hull. Stability at sea is altered in dynamic ways that depend on other design aspects. The stability curve doesn’t show the likelihood of reaching a given heel angle for example.

A frequent requirement for offshore yachts is exhibiting an AVS greater or equal to 120°, but the condition is quite weak. The EU-developed Stability Index (STIX) formula takes into account displacement and requires up to 125° AVS not to penalise small vessels. An 8-tonne yacht requires 120° to achieve a neutral score.

Commercial motor vessels are often required to meet conditions based on a minimum area underneath the GZ curve between given angles of heel: this equates to saying they must be “hard enough” to heel up to a specified point to be acceptable.