One of the largest technological differences between fitting out the sloop Yarra in the early 1990s and launching the Nordkyn design in 2010 was the transition from halogen to LED lighting. The performance and quality of LED lights was evolving so rapidly that I literally deferred purchasing light fittings until the last moment.The following sums up my experience with LED lighting.

White LED light is produced by shining blue and UV light onto a phosphorescent substrate that re-emits yellow light in response and the resulting spectrum is a mixture of yellow and blue that the human eye perceives as white. Since yellow in itself is a blend of red and green, all three base colours RGB are present and carefully balancing the emissions levels allows creating different hues of white.

LEDs where the blue colour dominates produce that unpleasant, harsh glare that was characteristic of early LED illumination. Warm white LEDs have a peak in the red wavelength. 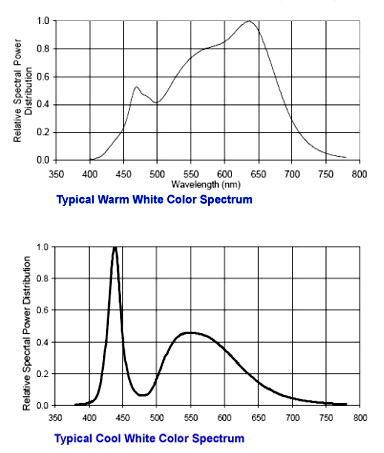 Hues of white are classified using a temperature scale in Kelvin. 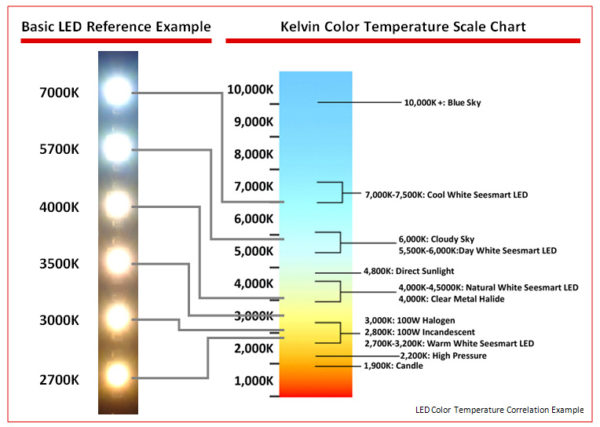 For cabin interior lighting, you should really select lights in the “warm white” or “soft white” range around 3000-4000K, otherwise you will start facing the horrid bluish glare of common white LEDs. Warm white LED light fittings tend to have a reduced output when compared to their ordinary counterparts, so you will likely need more lights.

From a very reputable manufacturer, I have bought lights with a specification of 3000K that met this value and others that were probably much closer to 4000K. It pays to have a look at them directly. I wouldn’t consider anything above 4000K for lighting living areas on board and the warm, yellowish light at 3000K definitely provides the most attractive results.

Use 5000K white and above if you want in utility areas, like engine room, lazarette, sail lockers etc, where maximum output is desirable and hue doesn’t matter. 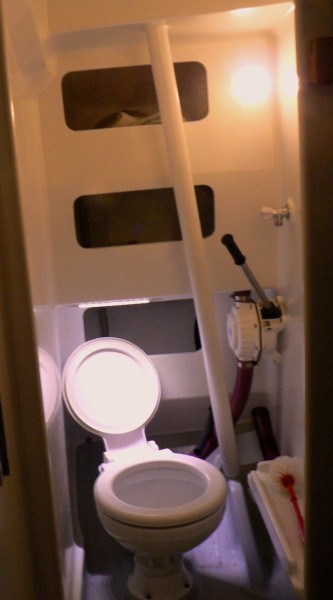 This area combines a 3000K light for general lighting with a 5000K strip light facing downwards.

One of the most puzzling aspects I encountered when I purchased LED lights is that they seemed extremely bright, yet didn’t provide as much illumination as I expected from comparative statements with halogen… 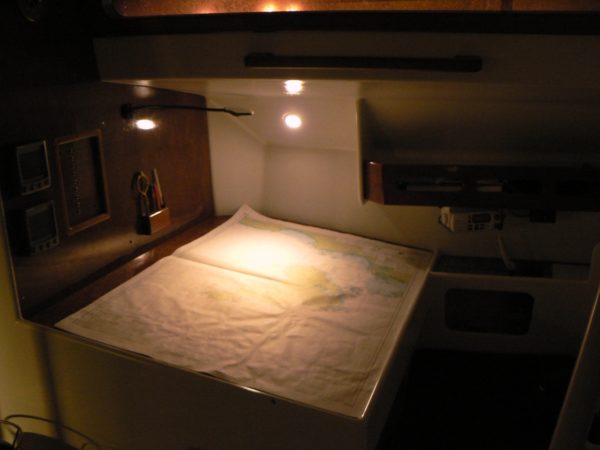 A single 0.8W LED source illuminates the chart table area. Note the shadows in spite of the fact the light is of a “wide-angle” type.

The issue can be traced back to the properties of the light source itself: a filament in a halogen light fitting emits light in all directions and a lot of the misdirected light is naturally reflected or diffracted around quite widely.

LED light sources, on the other hand, are quite directional and a great deal of effort is required to spread the light out optically by divergence. This results in much more defined transition zones between the illuminated space and the shadows surrounding it.

Also, on most yachts distances in the cabins are relatively short and the light doesn’t have a chance to spread out as it would in a larger volume. 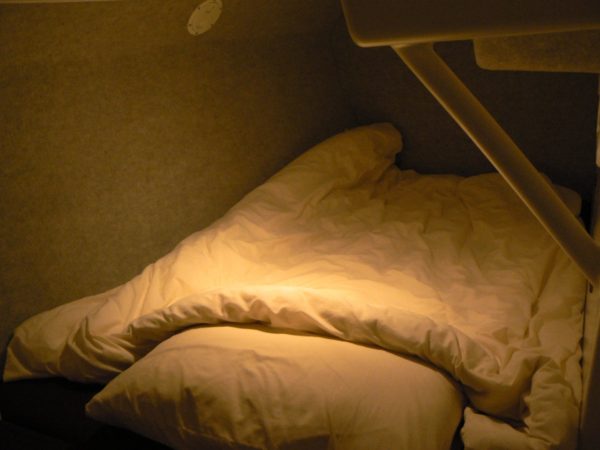 The same single 0.8W light in an aft cabin: impressive and very adequate result for so little power.

A rule of thumb at the moment is often that one needs twice as many LED lights to achieve the same illumination as what would be required with halogen lighting. More power doesn’t help, the need is for more distributed sources.

It is not always true however. LED lights that feature multiple sources geometrically arranged to cover wide angles can do a very effective job at illuminating a large space evenly. Small flush-mounted fittings suffer the most from light spreading issues, even when designed as “wide-angle”. 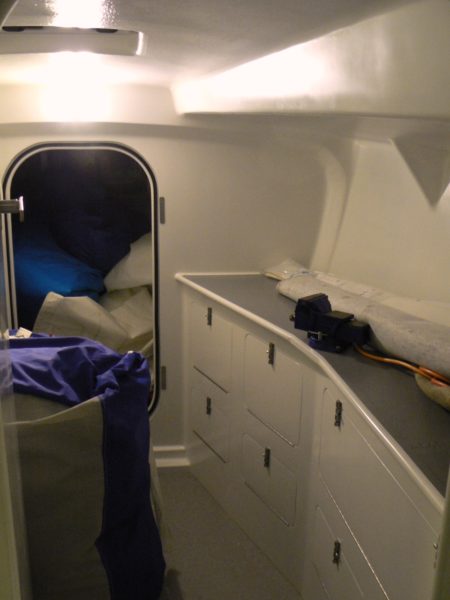 This 12-LED multi-directional fitting does an awesome job on its own in the forepeak, but the light is harder than the advertised 3000K.

Most of the LED lights I used were rated between 0.8 and 2.5 watts. I get far more lighting out of three 0.8-watt LED lights than I used to get from a single 10-watt halogen fitting.

All things considered, LED lighting results in electrical loads that are often 20-30% only of what halogen lighting would use for a brighter outcome when well implemented. Not only consumption is lower, but the quality of lighting can be superior.

One welcome consequence of the low power required is that light-gauge wiring only is required. A small 2-core 0.5mm2 round PVC cable can go quite a long way to power a 1 or 2-watt light.

You should only select lights that can operate over a wide voltage range, like 10-30VDC, for power consumption and other technical reasons that are developed further in a separate article about LED lights. They cost more, but this is really important if the objective is quality and durability.

If you have no direct experience with LED lighting on boats, the best approach by far is buying a few samples of the lights you want to use once you are happy with light temperature and brightness and staging a small trial one evening. 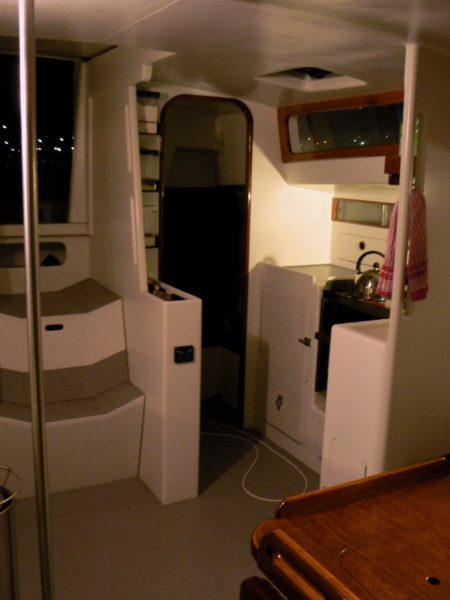 Use light wiring to connect each light to a supply and masking tape to hold the light fittings in place on board and have a play. In a very short amount of time, you will gain an invaluable insight into the number of sources you need and where to locate them.

You will also discover logical ways of grouping and switching the lights. More light sources results in additional flexibility for lighting only part of an area, which is very useful during quiet times on board. 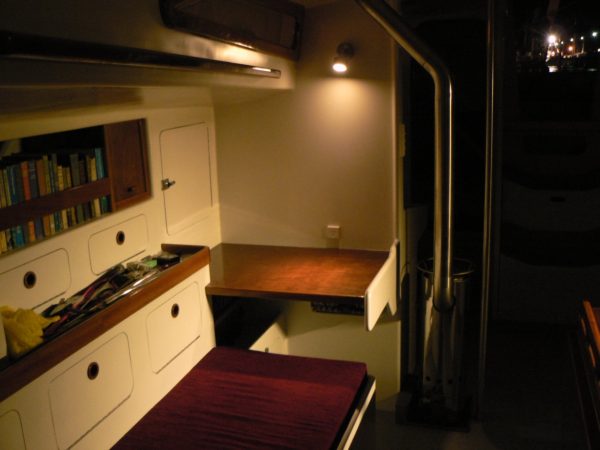 LED lighting on board truly is the way to go today, even though obtaining the desired results can be somewhat more difficult due to the large variation that exist between available models and manufacturers.