Over the years, I have come across many private boatbuilders and projects.

People broadly subdivide into two categories: builders and sailors. Sailors are those who have sailed quite extensively before and build a boat as a mean to go back to sea again. Those achieve very high rates of completion and usually keep to acceptable timeframes; in the boatbuilders camp, the picture is far more patchy.

Which brings the question:

Why would you build a bloody boat? 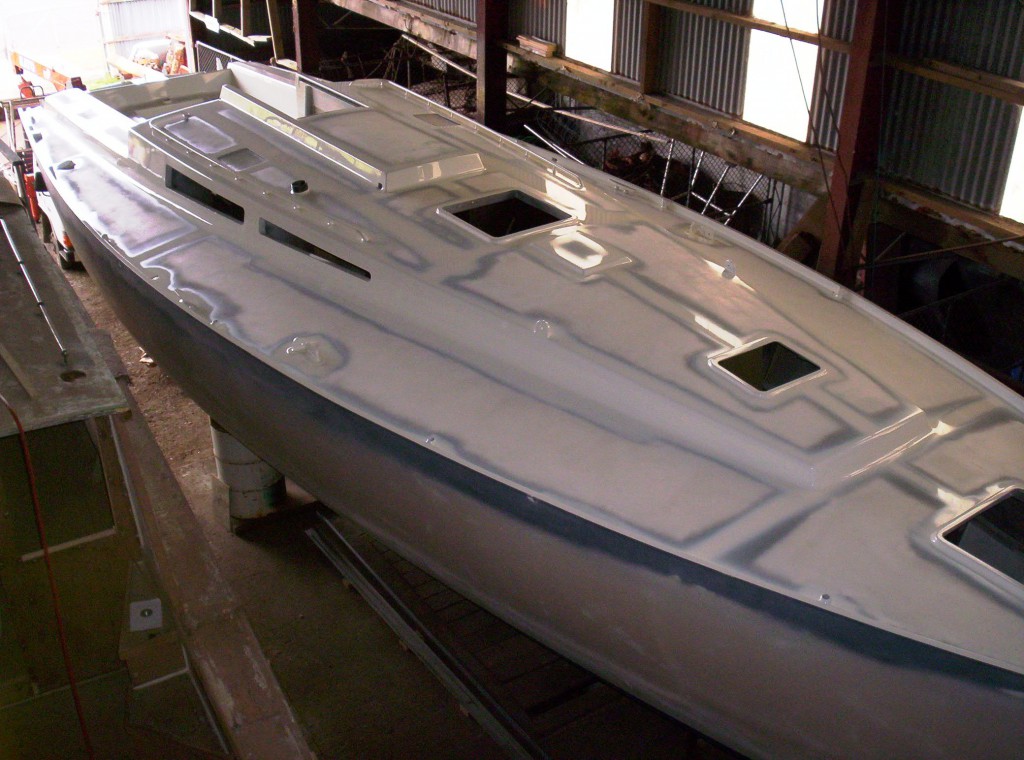 The sloop Nordkyn taking shape: sights like this one are little rewards along the way

So, in pragmatic terms, you would build a boat if the design is something different or you want it exactly your way, a boat you can’t find already built. At this point, you can build it yourself for a variety of reasons, or contract the build out.

However, in many of the instances I witnessed, the only driver was… building a boat. There was nothing special about it, many second-hand boats would have fitted the bill immediately. Projects rarely “self-justify”. Building a boat represents a considerable investment in time and money, and for most of us it requires a greater goal than just doing it.

Don’t tackle a significant, complex project, like an ocean-cruising yacht, if you haven’t got matching experience on the water

I considered doing this in the mid 1980s, when the idea of sailing offshore was taking shape, but the numbers simply didn’t add up. I am forever glad I didn’t get tangled up in such a venture at the time.
The problem is that, without relevant experience, we have no idea of what matters and what doesn’t, what we will really need and all the things we simply won’t. We make decisions based on beliefs and opinions and we tend to think we are quite clever, clever enough to overcome inexperience. It is a recipe for disaster.

People who build a cruising yacht without prior cruising experience also take another risk. Once the boat is finished and launched, they believe they have reached their objective, often to be bitterly disappointed. In fact, they have only reached the beginning of a new and often steep learning curve: getting to know everything needed to sail successfully, from boat handling to reading the marine environment, living aboard and navigation. I have seen quite a few boats sold at that point.

If you do decide to build your first boat as an ocean-cruising yacht anyway, make sure the plan is very comprehensive, do not deviate from what the designer specified and launch it on minimum specifications

Let’s put it very bluntly: if you think you know better than the designer, why aren’t you designing your own? Then you can have everything your own way, hull shape, scantlings, rig… you name it. Once on the water, you will get feedback about your performance either way.

I remember a 38′ steel yacht that had originally been built by a family in Canada, before they walked away from it in New Zealand. The plan called for 3/16” (4.8mm) sheet for the hull, but they decided this was nowhere near strong enough (!) for them. They built it out of 5/16” steel (8mm), and then used a steel, spiral-welded pipe for a mast.
Someone just as inexperienced then bought it – it was a bargain – and then invested into it the value of a decent second-hand boat over more than 10 years and achieved… nothing. The steel mast stayed and more weight and equipment was added everywhere. It became so heavy and dangerously unstable that more weight was then added to the keel and the whole exercise essentially ended up a write-off.

A classic I saw repeated a few times around the world was building a yacht from some stock plan or buying a perfectly good second-hand vessel and… replacing the entire rig: a junk rig had to be so much better, no point even trying the proven solution.
None of those boats I saw ever went anywhere. Under-canvassed, unable to point, the first attempt at sailing away resulted in a return back to the mooring under power followed by indefinite silent introspection.

Don’t mess with the plan.

Why minimum specifications? Because you don’t really know what you will need on the water. Rather than guessing and spending a huge budget based on beliefs, you have an opportunity to test and assess your real needs. Don’t look at what others have or do. Build it absolutely basic, take it out and go cruising for at least a few months. You want to sail at least two or three thousand miles, extended coastal is fine, no need to go offshore, difficulty goes down with the land further away. It will save you exactly three fortunes:

It will also save you the – priceless – complications and hassles that come with all of the above. All this equally applies if you source a second-hand yacht and fit it out for cruising – what I initially did.

If you have a family and other commitments, proceed with extreme caution. A common outcome is a large useless structure in a shed and no more family. If the driver was going cruising all together, that is also taken care of by then. Couples or families that all pitch in to build the boat are the rarest occurrence, but also the most successful and they do it much faster.

Coming out of the build of the sloop Nordkyn, the single and most essential piece of advice I would give is:

Don’t stop. Keep working on it, every single day. When you head for the shed, have a target about what you are going to achieve and try to exceed it every time.

Don’t sit around, thinking about what you could be doing. If you feel there are too many possible avenues at times, just pick a task and do it now. In the end, they will all need to be done.

Being able to see progress all the time is very important. If the project stalls even briefly, the completion date immediately shifts out of sight, beyond the horizon. If suddenly you can no longer honestly answer to yourself the question “when is it going to be finished”, you are in trouble.

Besides this, I found it useful to have more than one front open on the project a lot of the time. It allowed breaking some long, tedious tasks by doing something else for a while. I built my rudder and part of the keel in-between fairing and painting for example. I alternated between completing the deck plane and building some of the interior for a while.

If you are going to build your own yacht, you need to make the experience enjoyable, motivating and satisfying. This quickly falls apart if you stop working on it, no matter what the reason is, because it is a huge task.

Regardless of whether it made economic sense to do so, regardless of materials, value and all other considerations, if you do build your own boat, enjoy your project, launch it, take it out and it fulfils your expectations, the feeling of satisfaction and achievement will be one you would never have experienced by any other means.

It is a neat thing to have done.